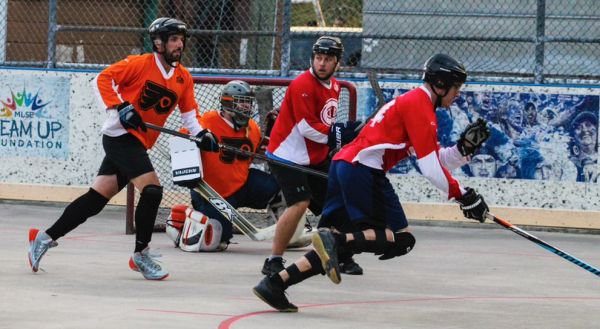 Most of the Rules of Ball Hockey mirror those of ice hockey, or what you are already familar with - this is not meant to be a comprehensive list. However, there are a number of special rules that you should be aware of if you have never played Ball Hockey before.

HPBHL games are two (2) 24 min stop-time periods. If you have not played Ball Hockey and think that is a short period of time to play, you will quickly find out that unlike Ice Hockey, where you can "coast" though some of your movement, Ball Hockey is a game for those who can keep their legs moving. 48 minutes is a lot of running.

Ball Hockey mirrors international hockey in that there is no 2 line pass. However, the largerst difference between Ball Hockey and most forms of Ice Hockey is the "Floating Blue Line" that regulates offides in the offensive zones. Once a player has moved the ball over the blue line into the attacking zone, the attacking zone increases to include the entire opponent's half of the rink. See the illustration on the right.

Ball Hockey has very stringent rules concerning penalties involving the use of the hockey stick. For this reason, "High sticking" the ball (contacting the ball above the normal height of the shoulders with the stick) is a 2 minute penalty. Hence, it's best to rid yourself of the habit of chasing a ball in the air with your stick (Street Hockey players - beware!)

Ball Hockey also enforces a double-minor for any slashing or cross-checking penalty. High sticking involving injuries will result in a 5-minute major and a game misconduct, and review from a league official.

As the league continues to grow, exciting times are ahead for the sport of ball hockey and we thank you all for your participation. High Park Ball Hockey League is dedicated to the players and teams.

Have a safe and enjoyable season!

Teams play one (1) ten (5) minute running time period, sudden death to determine the winner of the game. If there is no winner after the overtime period then a shoot‐out will decide the winner (see Shoot Out).

Teams choose five (5) players for the shootout. Each player is entitled to one (1) breakaway opportunity. The team that has the most goals after the 5 selected shooters wins the game. If there is a tie in goals once again, the shoot out rounds will continue with one shooter per team until the tie is broken. Players may not shoot a second time until all players on one team or the other have participated.

In the event that two (2) teams are tied in points upon closure of the regular season the following format will be applied to determine qualifying and seeding for the playoffs:

You may register a team or register as an individual and be placed on a team.

If representing a team you act on behalf of the team. You are responsible for the collection of all funds, i.e. registration and fines; as well as the organization of your team within the HPBHL rules and regulations. As a representative of your team and the HPBHL, you are encouraged to lead by example and understand the bylaws of the HPBHL. You act as the communication link between the HPBHL executive and the players you represent.

If you register as an individual player you will be placed on a team where positions may be available. The HPBHL executive will monitor the ‘Individual’ team to make sure that you and your teammates are comfortable and understanding of the rules and regulations. A team representative will be chosen by your team or by the league.

A team may have a minimum of twelve (12) and a maximum of sixteen (16) signed players. The TEAM REGISTRATION FORM must be handed to a league official before the first regular season game. There will be a designated team Addition/Deletion form for players to be added after the first game. If a player is deleted from your roster, then your team roster is reduced in size.

The roster on the official game sheet will be the official roster used by the Timekeeper. By using this form, the Timekeeper is made aware of players participating in that particular game as well as bench staff and/or suspended players. A player arriving late must be on the team roster AND report to the timekeeper prior to playing in that game.

Team rosters will be frozen (set) as of Game 6 of the regular season. All additions and deletions must be completed by the Game 6 deadline.

A player must participate in three (3) regular season games in order to qualify for playoff participation. It is very important that the team representatives check all game sheets immediately after game play to make sure that there is a match between your records and the leagues. If there is an error (i.e. player participated and wasn’t checked off on the game sheet) and it is not reported to the league office within 24 hours then the error proceeds unchanged. The League Executive will monitor player participation.

A team must have six (6) players in uniform by scheduled game time. If at the scheduled game time, a team does not have six (6) players in uniform then the team loses by default. It is the discretion of the official to grant a five (5) minute grace period before calling a game default. A defaulted game results in a 5 – 0 loss (see fines and suspensions).
If there are 6 players in uniform and no goalie dressed then a runner assumes the goalies position but may not cover up the ball in the goal crease or a penalty will be assessed. Teams are allowed to borrow goalies provided the borrowed goalie is signed in the HPBHL You may borrow goalies in the playoffs.

All players participating on a team must wear exactly the same coloured jersey. All team jerseys must be numbered from 0 – 99. Two (2) players may not wear the same number. Fraction additions or subtractions are not permitted. Numbers MUST be legible, no tape or other forms of temporary numbers are permitted. Teams must have ALL of their players in matching jerseys by the third (3rd) week or fifth (5th) game (whichever comes first). Goaltenders are allowed to wear jerseys of a different colour. Only running pants or shorts are permitted for bottom wear. They do not have to match in colour.

The following equipment is mandatory in order to participate in game play:

The following equipment is not mandatory but recommended highly by HPBHL

If possible, at the conclusion of six (6) regular season games the league may move teams into a different division in order keep the level of play balanced. This is not mandatory and is the sole discretion of the league executives

A third default by a team is an automatic expulsion from the league.

Per Game - A player will be ejected from a game if they receive 3 minor penalties or more during the course of the game.
Game Ejection - A player can be given a ‘Game Ejection’ in lieu of a misconduct penalty. Two (2) minutes will be recorded against the player given a ‘game ejection’. If a player is ejected from a game they must immediately go to their respective change room. Failure to comply with this rule results in an additional game suspension and possible default for their respective team.

All fines must be paid to the League Convenor prior to participating in the following game. If the suspended player participates before paying the fine, then both the fine and suspension are doubled and the game is considered a default loss. Recorded as 5 – 0 loss. Fighting, Misconduct and Match Penalties; (See HPBHL Fines and Suspensions).

It is the responsibility of the Team Representative to check the game sheet after each game to monitor fines and suspensions that may be applicable. (A final ruling on major incidents under review by the HPBHL Executive must be acknowledged and appropriate remedies taken before said player or team may compete in next scheduled game.) In most cases, all applicable fines and or suspensions will be marked on the game sheet, however it is still the responsibility of the Team Representative to know the HPBHL bylaws and to adhere to its’ fines and suspensions in the event it is not marked down on the game sheet correctly.

There will be two (2) referees and a Timekeeper assigned to each game. In most cases a senior official will be present. The League Executive may be approached by a Team Representative regarding most league related issues, however if the issue relates to a judgement made by a game referee then those issues should be discussed only with the Division Convenor.

ALCOHOL AND SMOKING ARE NOT PERMITTED. PLAYERS MUST BE AWARE THAT WE PARTICIPATE ON CITY OWNED PROPERTY AND THIS POLICY IS IN FULL EFFECT.
PLEASE NOTE - THERE WILL BE NO WARNINGS. IF A PLAYER IS CAUGHT SMOKING OR DRINKING ON CITY PROPERTY THEY WILL BE IMMEDIATELY REMOVED FROM FURTHER PARTICIPATION WITHIN THE HIGH PARK BALL LEAGUE AND POSSIBLY FINED BY THE CITY.

Teams are to start the game on the respective benches indicated on the season schedule. (If not marked on the season schedule clearly then the team listed on the left side of the opponent’s team on the schedule is considered the visiting team).
The goaltender will switch ends at the end of the period. It is recommended that runners start on the opposite end of the playing surface from their benches to make it easier to ‘pull’ the goaltender if needed during the final period.

The warm up clock shall indicate three (3) minutes. At approximately one (1) minute. The Referee will blow their whistle to warn teams to get ready.

Although not enforced, in an act of sportsmanship teams are encouraged to shake hands with their opponents prior to the game or at game’s end as determined by the league.

Each team is allowed two (2) timeouts per game. Timeouts are generally thirty (30) seconds in duration.

In the event that a team already has their goaltender pulled in favour of an extra attacker and then creates a foul on their opponent during a clear scoring attempt, then a goal will be awarded to the defending team.

In the event that a unique situation arises and it is not covered in the HPBHL bylaws, the League Executive or Convenor will make the best decision as they see fit.

All decisions regarding an appeal must be ratified before a player/team can compete in their next scheduled game. A mid‐season Team Representative meeting will be scheduled if time permits. All team payments must be paid in full by the final meeting scheduled. It is up to the League Executive to inform Team Representatives when the final meeting will take place. Teams that are not fully paid on that final meeting date may be subject to expulsion from the league or fined fifty ($50) dollars per week up to the start of the first regular season game.

If in the opinion of the League Executive, a player or team acts beyond the appropriate conduct necessary to the HPBHL rules and regulations, the player or team will be released from participating in the HPBHL and may only return subject to review.

If an appeal is to be made, it must be accompanied by a non‐refundable payment of twenty‐five ($75) dollars. The appeal fee ($75) may not be placed towards the fine in question. There are no appeals permitted for fighting majors.